Since 2010, MSK Emballage and Vicat maintain a long-lasting relationship. It all started with the sales and installation of several MSK Tensiontech stretch wrapping machines for three different sites of the Vicat group in France. But beyond the installation of the stretch packaging machines and their maintenance, MSK Emballage SARL continues to regularly advise Vicat on improvements on the quantity and the cost of the packaging.

As an international cement group and as part of the building materials industry, Vicat has specific needs regarding the packaging of their products. Indeed, one of the company's priorities was to secure the loading of trucks. Thus, setting up an automatic stretch hood pallet packaging line for building materials not only allowed to obtain high production performance, but also optimized the load securing system since pallets of individual hooded bags replaced the manual covering of the trucks.
The cement bags are thus effectively protected against moisture or any bad weather conditions during transport and outdoor storage by means of a closed cover.
In general, the MSK stretch hooding system has been designed to meet the specific needs of the building materials industry. Indeed, faced with loads that are often heavy or bulky, this type of hooding offers great stability during the transport of goods. It can also handle up to four different film formats or thicknesses. Long-lasting premium components and a robust construction offer a long-lasting system also for dusty and abrasive environnements. 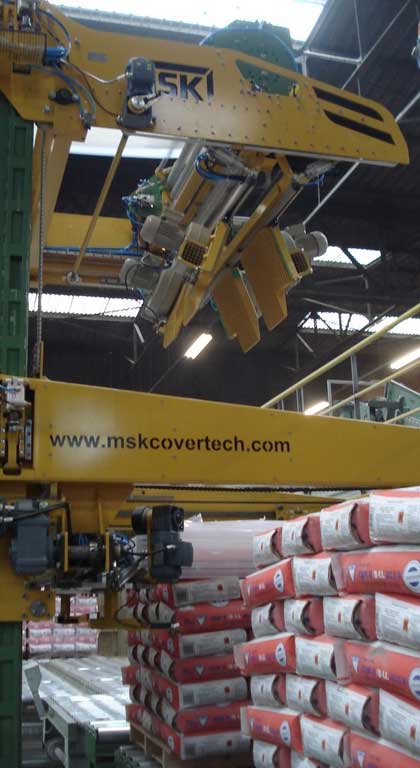 MSK – Customer satisfaction at the heart of our concerns

In addition to specific needs related to the building materials industry, MSK also respected the company's work by quickly installing the packaging machines, in just one weekend, so that the company did not suffer a production shutdown.
Another challenge characterized this project: the integration of the new packaging line within an already existing bagging line, which MSK Emballage was able to do thanks to its professionalism and expertise.
Customer satisfaction as well as environmental protection are important objectives for MSK. Therefore, MSK Emballage carries out tests jointly with Vicat with the aim of reducing the quantity of consumable used while preserving the high quality of the packaging. Over the years, the tests carried out have made it possible to significantly reduce the weight of a cover in terms of both the weight of the film and the quantity of film used.
The next step is the use of recycled film (containing up to 30% recycled material). MSK has already qualified this type of film for its stretch hood machines in its test center in Reyrieux. 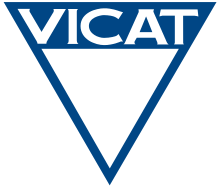 Thanks to a regular collaboration, MSK has allowed Vicat group to save on consumable costs, to limit their carbon footprint, while securing the loading of the trucks thanks to an efficient and safe stretch hooding system.

Mr. Guret, Quay Supervisor at Vicat Montalieu, stated: "Two MSK packaging machines have been installed and put into service at Montalieu. They have been integrated into the two bagging lines in operation. Since 2010, 100% of the cement bag pallets have been packed and we have already packed more than 1.5 million pallets.
Since the installation, a fruitful cooperation has been established between the MSK teams and the plant's maintenance and production teams as well as with the technical and purchasing departments of the Vicat Group. Since the commissioning of the two machines, we regularly call on MSK for annual maintenance but also for telephone support in case of problems. If the problem turns out to be more serious or if it requires technical knowledge that only MSK has, then their technicians come to intervene on site.
But they do not just come when there is a problem, we appreciate them coming to us to carry out tests to reduce the weight or to test new films containing, for example, a percentage of recycled plastic.
I would like to personally thank Clément Gagnière for his professionalism, his availability and his efficiency. From the beginning, a close collaboration was built between him, the stretch film supplier and me to make the stretch films reliable and to obtain the best performance of the stretch film, i.e., the best ratio thickness/quality of the packaging. I want to pay tribute to him for his help in discovering a technique that I did not know well.

MSK – Your partner for palletizing, conveying and packaging systems

Based in Reyrieux (near Lyon) since 1984, MSK Emballage SARL designs and produces complete solutions for load securing, conveying and palletizing for several branches of industry and offers different software solutions. MSK Emballage belongs to the MSK Covertech Group present in Europe as well as in the USA and China through its own subsidiaries. Since 1975 the MSK Covertech Group has been one of the leading manufacturers of palletizing, conveying and packaging machines for the automation of the entire pallet handling process, from the incoming goods department to lorry loading or the finished goods warehouse. Its complete team is made up of experienced employees: project and design engineers and automation specialists handle the specific requests of customers and accompany them from the design phase to the after-sales services, including tests and transport simulations. Well-known companies from a wide variety of industries belong to MSK’s solid customer base.
MSK Emballage SARL: the strength of a group, the flexibility of an SME.